One of the Subjects Dodged by Christians today.   In his book,Your Eternal Reward, Erwin W. Lutzer addresses this question. 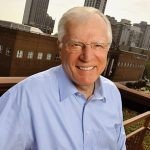 Accrording to the site of The Moody Church, Dr. Erwin W. Lutzer is Pastor Emeritus of The Moody Church where he served as the Senior Paster for 36 years.  He earned his B.Th. from Winnipeg Bible College, a Th. M. from Dallas Theological Seminary, a M.A. in Philosophy from Loyola University and an honorary LL.D.fromSimon Greenleaf School of Law.

He is a featured speaker on three radio programs heard in the U.S. and around the world.  Running to Win, Moody Church Hour, and Songs in the Night.  He has been on the air for many years.

He is also an award-winning author of many books, including: Rescuing the Gospel, He Will be The Preacher, One Minute after You Die, When a Nation Forgets God, and Hitler’s Cross (Gold Medallion Award Winner), to name a few.

He has spoken both domestically and internationally at Bible studies and conferences in Germany, Guatemala, the Republic of Belarus, Scotland, Russia and Japan.  He leads tours to Israel as well as the cities of the Protestant Reformation in Europe.

The Publisher’s Description on the Back Cover

Quoting Dr.Lutzer in his book, ‘When we reflect on how we lived for Christ, we might weep on the other side of the celestial gates.’

Dr. Lutzer addresses the fact that many Christians have emptied the judgment seat of Christ of its meaning, living as though they will never meet His knowing gaze.  For this they may have ‘tears in heaven’.  He explores the often overlooked Scriptures about reward and judgment for Christians.